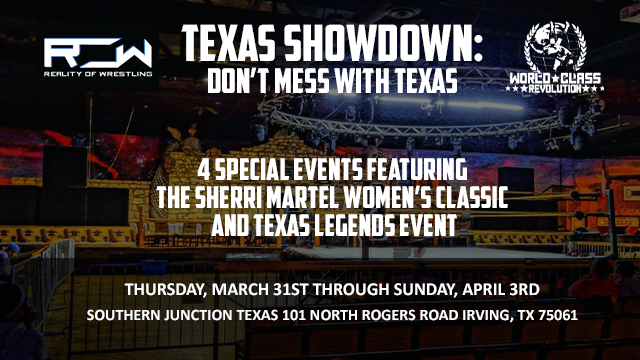 “Reality of Wrestling is excited to partner with World Class Pro Wrestling to bring you an action packed, four-day event, featuring the BEST in Texas wrestling. We’re looking forwarding to hosting the first ever Sherri Martel Women’s Classic AND the Texas Legends event. It is very important to me that we honor Sherri with this tournament; she was a dear friend and extremely instrumental in my career. I’m also proud to show the world what Texas is made of by honoring our Texas Legends, like one of my mentors, Black Bart. This is going to be GOODT! You don’t want to miss out, you don’t want to get shut out, and I KNOW YOU CAN DIG THAT!!!” said Reality of Wrestling founder Booker T.

“What an amazing day it is for not only World Class Pro Wrestling and Reality of Wrestling, but for Texas Wrestling as well. A sincere thank you to Charlie Haas, Eric Embry, James Beard, Booker T, and his team at Reality of Wrestling for coming together to make this happen. It’s an honor to be able to present the 1st EVER Sherri Martel Classic, named after, in my opinion, one of the most influential figures in pro wrestling. It’s also an honor to honor Texas Wrestling as everyone from the past has paved the way for us to be able to do what we’re doing today.” said World Class Pro Wrestling founder Jerry Bostic, “We can’t wait to show you what we have planned WrestleMania weekend. Thank you to everyone who supports both brands, without you this is not possible.”

Prior to each show, fans can meet with wrestling talent and legends.  For more information on TEXAS SHOWDOWN: Don’t Mess with Texas, please visit www.realityofwrestling.com and www.worldclassprowrestling.com. Also, follow along on social media:

ABOUT REALITY OF WRESTLING

Reality of Wrestling is a top-tier professional wrestling school and promotion that trains and showcases exceptional unsigned performers from around the world. Established in 2005, Reality of Wrestling is owned and operated by 2-time WWE Hall of Fame Inductee, Booker T. Huffman and his wife, actress and professional wrestling personality, Sharmell Huffman. Ranked among the top five wrestling schools and promotions in the country, Reality of Wrestling provides emerging professional wrestlers the opportunity to develop and hone their skills while featuring family-friendly content and quality wrestling programming to diverse audiences around the globe through television, social media and locally held events. ROW airs nationwide on television channels RokuTV and RightNow.  For more information, visit www.realityofwrestling.com.

World Class Pro Wrestling is a multimedia company that specializes in professional wrestling, and is owned by Jerry Bostic. World Class is committed to family friendly entertainment on its digital media, pay-per-views, and live events. World Class programming can now be seen in more than 100 million homes via its streaming partners Segi TV and StreamnetTV. Live events are currently featured in Texas, Oklahoma, Arkansas, and Kansas. Live Events are produced by wrestling legends Eric Embry and James Beard. The company is currently headquartered in Irving, Texas. For more information, visit www.worldclassprowrestling.com.