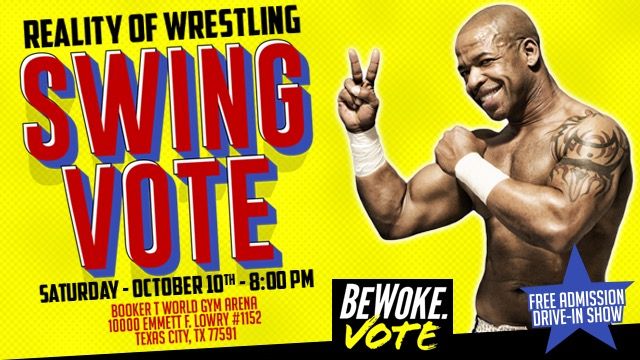 Free event, limited to first 500 cars in attendance will emanate live from the Parking Lot of the Booker T. World Gym Arena; Parking to open at 7:00PM with a Bell Time of 8:00PM

HOUSTON, TX and LOS ANGELES, CA, October 2, 2020 – BE WOKE.VOTE “REP YOUR CITY”, a nonpartisan initiative co-founded by Director Deon Taylor (FATALE, BLACK AND BLUE and THE INTRUDER) and Producer Roxanne Avent Taylor, and REALITY OF WRESTLING (The ROW), the Flagship of Texas Wrestling run by 2x WWE Hall of Famer Booker T, today announced a partnership for their upcoming show SWING VOTE to be held on Saturday, October 10th at the Booker T. World Gym Arena (10000 Emmett F. Lowry #1152, Texas City, TX) with a bell time of 8:00pm. The event is free to the public, but is first come, first serve and limited to the first 500 cars in attendance. Parking will open at 7:00pm.

Fans will be able to park their cars around the ring and we will have an FM transmitter so fans can listen to the commentary by Booker T & Brad Gilmore from their cars, portable radios, and or smartphones.

“We are so excited to collaborate with Booker T and Sharmell Huffman’s Reality of Wrestling for the upcoming SWING VOTE Event,” said Deon and Roxanne Avent Taylor, co-founders of BE WOKE.VOTE. “Professional wrestling fans are some of the best and most passionate fans in the world. Whether they are cheering or booing their favorite ROW Stars, they always make their voices heard and we encourage this same voicing at the polls this November.”

“The Huffman’s and Reality of Wrestling are thrilled to partner with Deon and Roxanne Avent Taylor, co-founders of BE WOKE.VOTE., for Reality of Wrestling’s upcoming SWING VOTE event,” said Booker T. and Sharmell Huffman. “Deon and Roxanne, two powerhouses in the entertainment industry, have created an essential platform and have enlisted the help of some of the world’s top celebrities and newsmakers to bolster voter engagement among historically disengaged people. We are more than happy to support this cause and more importantly…BE WOKE.VOTE.”

SWING VOTE will feature sponsored giveaways, free food and the opportunity to hear from guest speakers, as well as a top-tier card with matches including Reality of Wrestling Champion Ryan Davidson defending against former champion Abel Andrew Jackson plus more of your favorite ROW Stars in action.

BE WOKE.VOTE is a nonpartisan initiative co-founded by Director Deon Taylor (FATALE,BLACK AND BLUE, THE INTRUDER and TRAFFIK) and Producer Roxanne Avent Taylor, both of Hidden Empire Film Group. BE WOKE.VOTE is a voter engagement program committed to engaging people of color and features interviews with major celebrities and newsmakers from entertainment to pop culture. The primary objective is to mobilize historically disengaged people of color into the electoral process. We want to impact the underserved and underrepresented through innovative programming and campaigns.

ABOUT REALITY OF WRESTLING