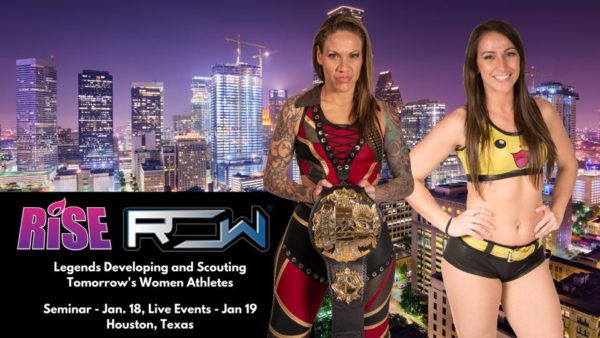 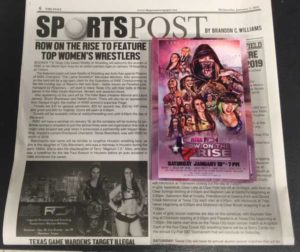 BOOKER T’S Texas City-based Reality of Wrestling will welcome the women of RISE to his World Gym Area for an action-packed night on January 19 beginning at 7:00pm. The featured match will have Reality of Wrestling star Kylie Rae against Phoenix of RISE Champion “The Latina Sensation” Mercedes Martinez. Also announced on the card will be a tag team clash for the Guardians of RISE Championship as the title-holding duo of Raven’s Ash and Dust – better known as Paradise Lost, managed by Rosemary – will seek to leave Texas City with their belts at the expense of the Killer Death Machines, Nevaeh and Jessicka Havok. Also appearing on the card will be The Killer Baes (Heather Monroe and Laura James), Shotzi Blackheart and Delliah Doom. There will also be an appearance from Saraya Knight, the mother of WWE women’s superstar Paige. Tickets are $15 for general admission, $25 for second row, $30 for VIP meet and greet and $40 for ringside. Doors will open at 6:30pm. Tickets will be available online at realityofwrestling.com until 4:00pm the day of the event RISE will have a seminar on January 18, as the company will be looking for potential women’s wrestlers to join the almost three-year-old organization that took a major step forward last year when it announced a partnership with Impact Wrestling. Impact’s current Knockouts champion, Tessa Blanchard, was with RISE for much of 2018. Blanchard’s last name will be familiar to longtime Houston wrestling fans, as she is the daughter of Tully Blanchard, who was a mainstay in Houston during the early 1980s. She is also the stepdaughter of Terry “Magnum T.A.” Allen, who also was a headliner for the late Paul Boesch in Houston before an auto accident in 1986 shortened his career.

Harlem Heat to be inducted into the WWE Hall of Fame Class of 2019
March 11, 2019
UPCOMING EVENTS
RECENT POSTS
THANK YOU TO OUR SPONSORS