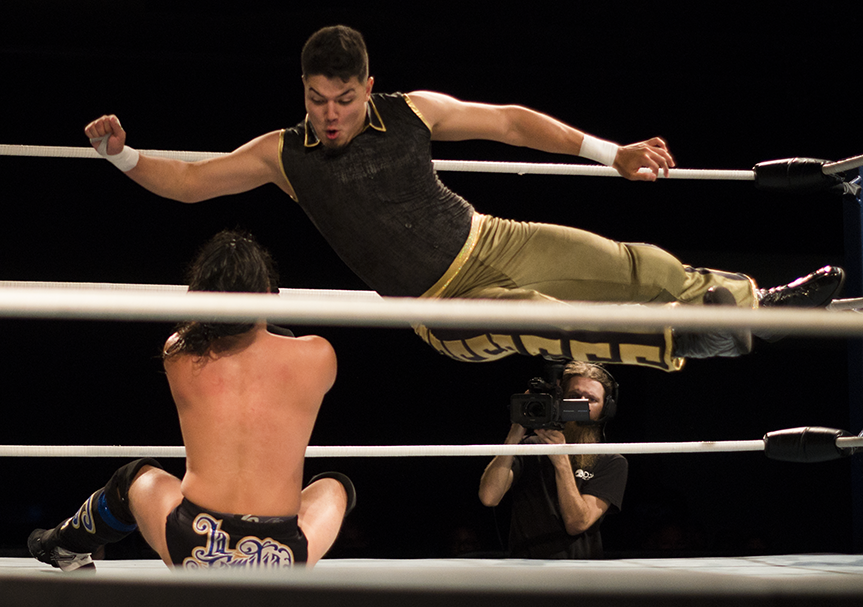 You’re still very young and have already accomplished so much. How does it feel to hold the record as the youngest champion in pro-wrestling history?

It’s great man, most of the success was from starting so young. As a lot of people know I started training when I was 14, so by the time I was 18 I already had 4 years of experience. It felt great knowing that one day getting into Reality of Wrestling seemed impossible and now that I’m 21 I’m a two time Reality of Wrestling Champion.

Your dad’s legacy is something that you are very proud of, and anyone that has seen you in the ring knows you’re doing him proud. What do you hope to add to the legacy?

The legacy is one of my main reasons I do what I do. My goal is by the prime of my career for people to know the name “El Sanguinario”. People looking up his name and realizing how great he was. Not just because he’s my dad, but because he was great, working for AAA and CMLL in Mexico and wrestling some of the biggest names of Lucha Libre. Even wrestling some of the names you hear about now like Eddie Guerrero, Chris Jericho, and Rey Mysterio. All this wasn’t even at his prime of his career. If it comes down to one thing is that for all my accomplishments I want everybody to know the name “El Sanguinario”.

You’ve done a lot in ROW in your time here. What is something you want to accomplish that you haven’t done yet?

To set more records. I’m already the youngest champion in pro wrestling history. Next I want to be the first time ever 3 time Reality of Wrestling champion. Maybe find a tag team partner and go for those tag team championships. Also to get to work with a lot of the up and coming talent. Just to get to wrestle everybody in the roster to prove why I am Intocable.

Anything else you want to tell the ROW Nation?

Just to be ready because Gino is only getting better. I’m training everyday getting all the knowledge I can get just to be better in that ring for all the fans. To make the Reality of Wrestling bigger, and make everybody around me better too. Just to be on the lookout because soon I will be El Fino, Divino, Gino, the first time ever 3x El Campéon.

Behind the Scenes Interview with Hyan
August 5, 2017

Behind the Scenes Interview with Ivory Robyn
July 26, 2017